Chris has been moping around the house for the past several weeks. He’s developed a head cold and a slight cough. Two days ago, he finally broke off his relationship with “Jenny” after hinting about doing so for weeks. HE broke it off, not her. As he related it to me, feeling the pressure of a full time relationship, no matter how good it was, was wearing on him. He said couldn’t plan any future with her if he was still in the process of figuring out how to move forward himself. “Jenny” was understandably quite upset. As soon as Chris broke up with her, he immediately began questioning his decision. It’s been a pretty emotional two days. I offered my sympathy, because I am sympathetic, but, wary that Chris usually feels guilty and at fault, I suggested to him that he made the right decision for now, and urged him not to backpedal. “Chris, you have a vocational resumé, and you also have an emotional resumé, and you’ve been getting some pretty good experience in the latter – how to navigate the turbulent waters of a relationship. If you were feeling ambivalent, under stress (whatever!) honor your decision because it respects these feelings.”

On a related note, this morning Chris and I paid a visit to the “Plant Power Guy.” When Chris first saw him seven months ago, the PPG, through his unusual testing techniques and not knowing Chris’s diagnosis, determined that Chris had NO functioning immune system. This makes sense, if you speculate, as scientific research is increasingly doing, that schizophrenia may be an auto-immune problem. What Chris has, is probably a hyper-immune system. Hyper-immunity in Chris’s case is evidenced by his never having experienced a cold, a fever, a sore throat, the flu, etc. That is, until now. He did experience psychosis, so that’s where the auto-immune system may have got him. All this is speculation on my part, of course.

The PPG did his testing, and, lo and behold, Chris’s immune function registered as normal. I suspected that at least his immune function would be improved, so it was surprising, but welcome news. There could be several explanations for the much strengthened immune system, not simply the plant power extracts that Chris has been taking. Chris suggested that it might have to do with the low gluten diet that he has adopted. He’s been on it only two weeks, and I wonder how rigorously he adheres to it, but anything’s possible. A love relationship could also be implicated, as in his defenses are down*, he is relinquishing his physical and mental defenses.

I first got interested in the trauma theory of schizophrenia when I learned about neurologist Dr. Dietrich Klinghard’s pyramid of healing. Briefly stated, “schizophrenia” is located Level 4 of the pyramid, the level of intuition, dreams, trance, meditative states, out-of-body experiences, and the collective unconscious. Dr. Klinghart believes that healing that takes place at this level has a trickle down effect on the lower levels, where impaired physical health expresses itself. 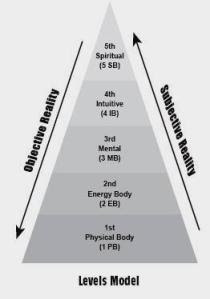 If Dr. Klinghardt is on to something, then there is no pressing need right now for Chris to consult an immunologist about his immune system, as I wondered about in my last post. Since Chris has undergone several trauma clearing therapies and is boosting his immune system now with plant power (2nd level), a good strategy might be to continue to wait and hope for the trickle down health benefits. These surely don’t happen overnight. I have seen some small evidence that points to his immune system beginning to send the right signals to his body. This strategy also had the added allure of not bringing in medical doctors to to further complicate our lives.

Chris and I met with the plant power guy bright and early this morning for a check-up on our general level of health and energy. I’m well enough, as these things go, just a bit of cardiac trouble looming if I’m not mindful of his products, LOL. Chris, according to the PPG, has a barely registering immune response. Supposedly, it has improved only slightly since the last visit. I’m getting to the point of wanting a specialist, an immunologist, to run specific blood tests, now that we have more information pointing to a possible underlying condition that may have precipitated Chris’s psychosis.  But, I do wonder if it’s worth the bother. More doctors, for what? I haven’t heard of addressing symptoms of “schizophrenia” through treating the immune system. We’re not there yet. It’s still in the realm of promising areas of future scientific research. The other option is to just let the PPG do his thing (recommend special immunity boosting plant power) over the next few months and see what happens. It’s up to Chris to determine how he would prefer to handle it.

Chris is incapacitated in bed today with the flu and running a fever. I can’t recall when he was ever sick as a child or adult. Not a cold, not a fever, no ear aches, stomach aches, nothing. For the past month he’s been taking drops that are supposed to strengthen his zero functioning immune system, according to the naturopath. There is now something quite bizarre going on. Occasional flus and fevers are normal. Perfect physical health like Chris has experienced is not. If Chris’s immune system begins to function  (“if“)  will this mean that he will trade his particular brand of “schizophrenia” for different health concerns or more everyday health? The immune link interests me because my spleen was removed as a child due to thrombocytopenic purpura, which suggests that Chris may have an inherited autoimmune condition.