A Waunakee, Wisconsin high school dance team has created an uproar over its “psych ward” routine. It involves the anti-stigma crowd, the comments from the gym teacher  (whose intellectual muscle if she ever had one has slipped below her neck), and then there is the rather low IQ sports writer who accuses the anti-stigma people of being overly politically correct. This is the kind of story that is tailor made for Fox News, USA Today and . . . blogs.

I can’t get too fussed since I deliberately avoid just about any event that would involve cheerleaders, stock car racing or the National Hockey League, knowing that I may be frequently wincing at what I see and hear. What I find most amusing are the comments from the coach and from columnist Rick Chandler. It’s like, hey, how smart are they?

Erin Cotter, the team’s head coach, says she is taken aback by how upset people are about the routine. “I don’t understand where they are coming from,” she says. Hip-hop is all about being “bold,” she says. Last year, a competing team dressed in orange jumpsuits pretended they were prisoners, she says. “The whole point is to get people pumped up and energized. Our intent had nothing to do with mental illness. Our total intent was just a hip-hop dance and the songs and the words that were popular. The thought never crossed my mind or the school’s or the parents’ or the kids’ that it was about mental illness.” 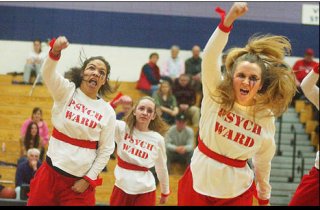 Here’s the picture. I rest my case. It’s like, hello, it never occurred to her that this dance routine had anything to do with mental illness? It’s totally awesome the way these girls combine making a fashion statement with lurching like they’re on heavy duty antipychotics. One photo observant reader wondered if psych patients always bleed from their eyes.

The columnist dude, Rick Chandler, thinks that “teaching our children to back down under pressure is not cool.”