I used to work for pharma. It was only a summer line job at the pharmaceutical firm where my father worked, but it was in pharma. Back in the 1970s, the firm was the biggest employer in the county. Actually, it was just about the only employer in the area that paid decent wages. Those unionized paychecks went a long way to covering my living expenses through four years of university. Almost everybody we knew worked at the company in the company town – my friends’ parents, my parents’ friends. Pharmaceuticals were king. People liked pharma. One of the firm’s big sellers was a hormone replacement drug that mother and her friends all swore by. In their opinion, it was even better than Tupperware. (I only remember one of my mother’s friends developing breast cancer.) There was this unbridled post-war belief that advances in technology and pharmacology was only going to make our lives better and better.

I worked on the production line, wearing a hairnet, white coat and sensible shoes. The job involved either inspecting pills or sterilizing bottles on a daily basis. Here’s a picture of how to load the hopper. I like routine jobs. You know what to expect. 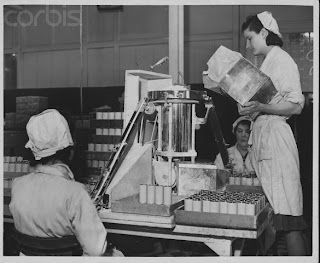 Despite the fact that my father worked at the company and was a believer (and a shareholder), he also became a fervent fan of vitamins. When he was in his mid-fifties he developed a circulation problem in his leg, possibly due to years of smoking. He quit smoking cold turkey. My mother had been reading about vitamin E. They made a pilgrimage to the Shute brothers clinic in London, Ontario to learn about the benefits of this wonder drug. Eight hundred international units of vitamin E along with other daily vitamins improved my father’s health significantly. He felt great. He told others. Did my parents check with the family doctor about whether they should do this? They did not. The family doctor, it was felt by many in the town, was a pill pusher. I haven’t heard that expression for a while.

The example set by my parents is how attitudes are developed about one’s own future health concerns. My parents believed that the daily intake of vitamins allowed them to flourish well into their eighties.

This was the era of the television show Laugh-In and the Farkle Family sketches, where a lot of the fun focused around the double sounding alliteration of the letters F and PH. The president of the pharmaceutical company in our town was an unassuming little man named Franklin F. One of my high school friends who also worked on the line had us all in stitches when she came up with the expression “Fine pharmaceutical firm you have here, Frank.” That’s how everybody in that country and in that era felt about it, too. Pharma was fantastically fine back then.

2 thoughts on “When pharma was fine”