Robertson Davies is about my all-time favorite author. If you haven’t read any of his books, you should give yourself the pleasure. When I think of quotable authors or celebrities, he’s right up there with Carl Jung. In fact, I can’t think of any book that he has written that is not intellectually deep, easy to read and laugh out loud funny.

Background
In the 1940s, when Davies, author of the Deptford Trilogy and What`s Bred in the Bone, was publisher of an Ontario newspaper, he invented Samuel Marchbanks to comment on and satirize Canadian life in a short column. Marchbanks disappeared in the 1950s when his creator turned to writing plays. By the time Davies made his name in 1970 with Fifth Business, the first of the Deptford books, Marchbanks had long since sunk into retirement at his favorite haunt, the Crank and Schizoid* pub in Toronto. 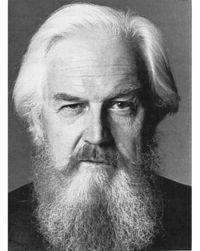 “I was embarrassed to be such a fool in a situation that I had told myself and other people countless times I would never submit to — talking to a psychiatrist, ostensibly seeking help, but without any confidence that he could give it. I have never believed these people can do anything for an intelligent man he can’t do for himself. I have known many people who leaned on psychiatrists, and every one of them was a leaner by nature, who would have leaned on a priest if he had lived in an age of faith, or leaned on a teacup reader or an astrologer if he had not enough money to afford the higher hokum.”

When Chris was showed up at the hospital emergency room in December 2003, he was diagnosed simply because he appeared schizophrenic in the opinion of the doctor. Now, I ask, is this the best we can do in this day and age? If you show up in the emergency room complaining of an intense headache or a stomach ache, chances are you would be subject to a whole battery of tests until a diagnosis is made. Six years later any tests that Chris has undergone were at my insistence, never once at the instigation of his doctors. To put this another way, Chris’s medical care has amounted to over 500,000 USD, a staggering amount to bill to an insurance company without it demanding accompanying medical examinations to determine what may be causing the problem.

I insisted a week after Chris entered hospital that he undergo an Magnetic Resonance Imaging (MRI) to rule out a brain tumor. There was a reason for my concern related to a specific incident a few months earlier. The doctor never once suggested an MRI. Amazing, isn’t it? For such protracted, expensive treatment that not even the insurance company demands additional tests be done, makes one wonder.

What is truly outrageous if you think about the money aspect, is that six years on, Chris is still considered schizophrenic by his doctors (or possibly now obsessive-compulsive, judging from the pamphlets he has picked up in his current hospital stay) despite the oceans of money being spent. Mental patients are the cash cows of the mental health system.

Psychiatrists are not doing a very good job of it. If a company failed to make money for its shareholders, the president would be fired. If a Broadway show failed to attract an audience, it would close. Why does high-priced treatment for schizophrenia persist in the face of failure? Sadly, the answer is that the public has bought what author Robertson Davies calls the “higher hokum” of psychiatry (“teacup readers in an age of faith”) It hasn’t dawned on sufficiently large numbers of people that psychiatrists, researchers and academics are making money off the misery of mental illness by favoring the interests of pharmaceutical companies over the public interest.