Perhaps you’ve heard about Dr. Norman Doidge’s latest book, The Brain’s Way of Healing. Dr. Doidge (pronounced ‘Dodge,’ I believe) is a psychiatrist and psychotherapist who has turned himself into Dr. Oliver Sacks, meaning he likes to write about interesting patient stories from the frontiers of neurology. His first book was titled The Brain That Changes Itself.

The concept of brain plasticity (the discovery that the brain is able to form new neural pathways), Doidge informs us, has been been around since the 1970s but only began to enter the public consciousness in 2006. That appears about right to me, as in early 2004 Chris’s psychiatrist told my husband and me that his brain was sort of like rapidly solidifying concrete that needed to be ‘protected’ from further rigidity and loss of neurons through the administration of neuroleptic drugs. That theory had already bit the dust but somehow the psychiatrists at the Centre for Addition and Mental Health didn’t receive this message. I won’t go into how pessimistic the concrete brain concept was in comparison to plastic brain concept, but it still grates how much damage was done by their telling us that Chris’s brain was damaged. That and the schizophrenia diagnosis. Horrible. I’m still not convinced “schizophrenia” is a brain problem, in any case.

I’m not sure what Dr. Doidge’s position is on schizophrenia. It’s interesting that a person who is a psychiatrist and psychoanalyst by training doesn’t address schizophrenia as a topic in either of his two books. That’s like a priest who writes about religion failing to mention God. Is it because he doesn’t think schizophrenia is a problem with one’s brain and he is aware that lots of people recover from this condition so there is nothing neuronally (is this a word?) intriguing about it? If so, he would do us all a favor by saying so! I’m in the process of putting my question to him in a letter. (Of course, it’s also possible he prefers writing about neuroplasticity rather than dealing with patients. He wouldn’t be the first doctor to reposition himself as far away from his patients as possible,)

One of the chapters in the book is on how a blind man got his sight back relying on the Feldenkrais method. I’ve made a few efforts in the past to get my sight back to 20/20, but didn’t see a lot of progress so I stopped doing the exercies. I’ve bathed my eyes by staring at the sun with my eyes closed, I’ve rotated them clockwise and counterclockwise, but the Feldenkrais contribution I read about added something new that I think is key. Doing this exercise for a couple of days noticeably strengthened my peripheral vision. Having better peripheral vision is a huge confidence booster. I even did the grocery shopping without once putting on my specs!

I have swiped another excellent post from today’s Beyond Meds in order to make a schizophrenia related point. That point is about how psychiatry tries to scare us (patients/families) into medication compliance by telling us that “untreated” schizophrenia, meaning in pharma-speak, pharma treated mental illness, leads to brain damage. Never mind the fact that there is no sign of brain damage in the untreated schizophrenic brain on the autopsy table, as psychiatrist Thomas Szasz insists there should be in order to show damage. 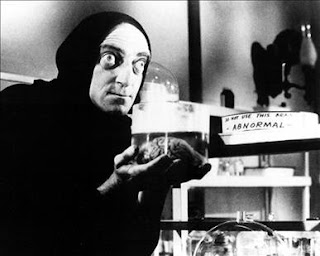 And there has to be some stick to use to drive them to drugs, so psychiatry has enthusiastically taken up the cudgel of depression as progressive brain damage.

The progressive brain damage trope doesn’t fly — clearly many people recover from “depression” and other mood disorders without drugs and seem to be as good as anyone else.

It is an absurdity and an offense to humanity to argue, for example, that 2 weeks of grieving, which can be diagnosed as major depression, becomes brain damage if allowed to continue longer. In general, the brains of “depressed” people, even ridden with all those diseased circuits, work fine. Many are even intellectual leaders and creative geniuses.

Imagine, you are like me, a vulnerable parent, arriving at the emergency entrance of the hospital with your “loved one” in tow. You are panic stricken. Your “loved one” sure is acting weird, no doubt about it, and this is the perfect opportunity for the doctors to spring upon you the news that, without medications, your relative’s brain is going to look like Swiss cheese. You don’t need much convincing that there is something definitely wrong with his or her brain, because he/she sure is acting strangely, and you cling to the drugs like a shipwrecked sailor to a life raft. You think you’re being responsible, and you are, based on the information that you’ve just been given. Unfortunately, it’s false information. Remember, schizophrenia is not seen on the autopsy table, nobody has discovered a gene for it, and it is repeatedly alleged that neuro-imaging anomalies are often due to the effects of medication.

Back in Dec. 2003, the intake psychiatrists at the Centre for Addictions and Mental Health (CAMH) in Toronto had either never heard of neuroplasticity, or else they were trying not to let the latest research escape into the hands of the general population until they got the new story line straight. The doctors told my husband and me in all earnestness that my son’s brain was going to slowly solidify like drying concrete (new word “neuroconcretivity” LOL)  if he didn’t get on those drugs toute de suite. That was only in 2003. Then, suddenly, around 2005, I would say, we start hearing that the brain has endless capacity to reinvent itself, busily erecting new turnpikes in the neuronal information highway. The brain was now plastic.

Is being plastic good or bad? I dunno, it initially sounded to me like good news, but the pharmaceutical companies are dealing with the new findings like it’s business as usual: “The brain needs to be protected from progressive brain damage.”

Damage caused by what, exactly? The fact that neurons may have taken a detour around the diagnosis? The damage in lost revenue, perhaps?