For therapy to work, both parties must have faith, sometimes against all reason, that their expedition will succeed. 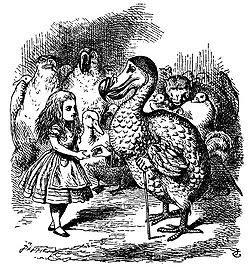 I heartily recommend Gary Greenberg’s article America’s War on Unhappiness in Harper’s Magazine/September 2010. It is an often tongue-in-cheek look at the post-Freudian state of therapy today. Unfortunately, the article is only available to Harper’s subcribers. I have written about it previously here.

Greenberg writes about the “Dodo Bird Effect” as it applies to therapy. The Dodo Bird Effect is a term borrowed from Alice in Wonderland and coined in 1936 by psychologist Saul Rosenzweig. Rosenzweig discovered that it doesn’t really matter what therapy you choose to pursue, because they all work. “Everyone has won and all must have prizes” is the way the dodo bird put it. The Dodo Bird Effect is similar to the better known placebo effect. But what numerous studies have shown since the Rosenzweig study is that the single factor that makes a difference is FAITH, the patient’s faith that the therapy will work and the therapist believing in what he does.

Step back from this insight and marvel. It doesn’t matter what your chosen course of action is re supposedly “treatment resistant” schizophrenia, as long as you believe in its ability to produce the outcome you want. You don’t even have to buy any of the therapies that Chris and I have tested – just find your own version of the truth and run with it. (I recommend not putting all your dodo eggs* in one basket. Spread your therapeutic interventions around and very importantly, find a therapist who believes in what he or she is doing.)

The key here is that if a therapy is to work, not only the patient but the therapist must believe in what he does. Since my son’s initial two year course of day program and drug therapy was what I would call a failure, I came to the conclusion early on that the therapists actually didn’t believe in the approach either. Imagine going to work every day and not believing in what you are doing.

It’s especially critical for therapists to believe in happy endings. The doctors in the day program had a “professed” belief in the medication, where they seemed to put most of their emphasis, but it became obvious to me as it should have been obvious to them, that if the patient isn’t getting better you’d better find approach you actually do believe in or take down your shingle. I could tell that the doctors also didn’t believe that schizophrenia was “curable” and that my son would get through this. One way of measuring their belief is by the words they used and the tone of voice. To them, schizophrenia was a sad, sad business. This doesn’t inspire belief by others, because belief must be positive in order to heal. They couldn’t sell me on a healing outcome because the elaboration of the Dodo Bird Effect says they didn’t believe in one.

We have been lucky. Once I figured out that the program wasn’t going to help Chris, I looked around for doctors who could. I found two excellent psychiatrists. The first one introduced us to the world of holistic healing and energy medicine. Dr. “O” totally believed in what she was doing and her belief was contagious. Dr. Stern passes my litmus test for belief through her commitment to what she does as a Family Constellation therapist amongst other interventions.