This post is a tribute to Gianna Kali, the creator of Beyond Meds, a blog about withdrawal from medications, but not just a blog about withdrawal. Gianna has chosen to continue her healing journey without the tiring demands of daily blogging. Gianna Kali is her pseudonym. Perhaps she took inspiration from the Hindu goddess Kali, the dark goddess, whose name is associated with time and change. 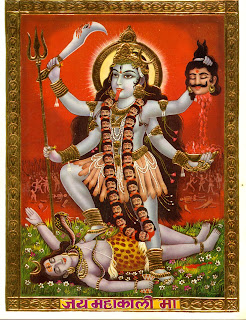 Like most goddesses, Kali is controversial. Her goddess persona changes with the time. She has an original terrible side associated with death and destruction, but also a later repositioning as a warm and kind maternal Mother of the Universe. Like a mother, she is a protectress of last resort. Indian mythology is complex and has evolved over thousands of years. Since I am not an Indian scholar, I will leave interpretation to others, such as this writer:

Gianna Kali is generous of spirit. She chronicles her healing journey to help others and she has helped neophyte bloggers like me spread our message through her blog. Spiritual to begin with, she eventually found herself on the painful path she was destined to take.

In the book, Goddess Shift: Women Leading for a Change, Dr. Susan Kolb writes about her own healing journey in terms of the mythology of the wounded warrior. In order to heal others, a person has to undergo a revolutionary healing journey of her own. This is a sacred journey, also documented as the path of the alchemist. The warrior emerges stronger, wiser, better able to carry on and an inspiration to others. Through ordeal, the warrior comes to know herself.

Thank you Gianna and all good wishes for your continuing recovery. We look forward to hearing from you when you are ready.