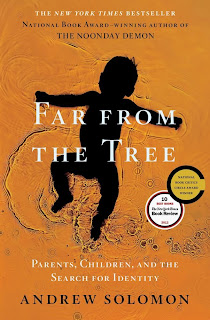 I’ve just started reading Far From the Tree, by Andrew Solomon. My friend, Lisa, who will be a first time grandmother in the next few weeks, handed it over to me because it wasn’t the kind of bedtime story a soon-to-be grandmother should be reading. Solomon’s book is about parents coming to grips with their child’s deafness, dwarfism, gayness, schizophrenia, etc.  Lisa said every chapter seemed to have an interview with a mother who said, “all seemed fine . . . until the baby was born.”

Does the apple fall far from the tree?  I don’t believe it does. Perhaps it’s my experience in Family Constellation Therapy that tells me that family inheritance is social and subtle, not all genetic. Andrew Solomon is gay, and in the forward to the book, he says something that is quite astonishing to me. He writes that most parents of gays are straight, and sexual identity gets picked up in the exterior environment with which the child comes into contact. Wait, wait! Sexuality, like other character traits, is on a spectrum. Not all men and women are robust representatives of their sexual assignment. Many people who have what we might think of as latent homosexual tendencies, get married and have children.  Sex may not be a big part of the relationship, other than feeling a societal duty to procreate. The child, will, however, observe, and draw a sexual identity

So, it’s telling that the author would portray schizophrenia as a brain disease,and pooh pooh the environmental influence almost altogether. He has been indoctrinated in the E. Fuller Torrey approach that is so discredited by activists in the psychiatric rights community.  Who did he interview for the schizophrenia chapter? The misery crowd. Mainly elderly parents of middle aged children who appear not to have made any attempt to understand their children in the context of a greater truths. The book description poses the question: “All parenting turns on a crucial question: to what extent parents should accept their children for who they are, and to what extent they should help them become their best selves.” By and large, the parents and families is the schizophrenia chapter appear to have neither accepted nor encouraged.

Had these parents shown more empathy and understanding, perhaps these stories would be different. Many tossed out their children to the streets, or group homes. Some chose not to speak to their child for years. (This sounds like how homosexuals were treated in years past, and in many cultures today.) They term their own progeny “crazy” and describe all the awful things their child has done to them. Today, would a parent be so derogatory towards a gay son or daughter? No, in western cultures, at least, there has been a revolution in thought, understanding and acceptance of a deviation from the norm.

Shouldn’t Andrew Solomon, given his identification with being a gay person, have realized the irony of the schizophrenia chapter? His portrayal of schizophrenia as dismal and chronic, just reinforces how strongly lobby groups like the Treatment Advocacy Center and NAMI have influenced the public understanding of mental illness. The misery crowd has blocked the public’s ability to see the common ground between gay rights activists and mental health activists. People with mental health issues, marginalized as crazy by TAC like groups, will not be effective advocates for themselves.

I’m looking forward to rereading the schizophrenia chapter and doing further posts on this subject. The author has some interesting observations that I would like to tease out.