My son Chris has benefited from psychotherapy, as he has benefited from many other interventions that he has undertaken on the road to wellness. He was exposed to psychotherapy at the day program he attended from 2004 -2006 and has been doing it weekly beginning in 2006 with Dr. Stern.  As you can see, psychotherapy is no quick fix. It is lengthy, and obviously, expensive if your insurance company does not take the long term view. Judging from the sheer number of psychotherapists in the city directory, psychotherapy has no image problem where we live, in contrast to the Op-Ed piece in the New York Times (below). It’s not really for me to say whether or how much Chris has benefited from any of the many treatments and therapies, I just know that today he is much more “together” than he was ten years ago. A problem with psychotherapy, in my opinion, is that is is open to longer term abuse, unlike other one-off or short term therapies that Chris was able to walk away from, having reaped the benefits. With psychotherapy, you are under the spell of the therapist, who dictates when the patient is “ready” to stop therapy, which, of course, means a drop in income for the therapist. In other circles this would be considered a conflict of interest.

By BRANDON A. GAUDIANO

PROVIDENCE, R.I. — PSYCHOTHERAPY is in decline. In the United States, from 1998 to 2007, the number of patients in outpatient mental health facilities receiving psychotherapy alone fell by 34 percent, while the number receiving medication alone increased by 23 percent. 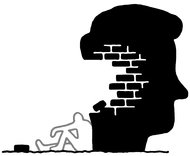 This is not necessarily for a lack of interest. A recent analysis of 33 studies found that patients expressed a three-times-greater preference for psychotherapy over medications.
Read more here
Still,