If you are looking for some real entertainment this week-end, I highly recommend seeing the new silent movie, The Artist.  Here’s an extract from L.A. Times film critic Kenneth Turan’s review:

Far from embracing the most modern cinematic techniques, “The Artist” is a glorious throwback, a black-and-white silent movie that manages the impossible: It strikes an exact balance between the traditions of the past and the demands of the present, managing to be true to the look and spirit of bygone times while creating the most modern kind of witty and entertaining fun. Look on this work, ye mighty of Hollywood, and rejoice……..

…Key to the success of “The Artist” is the work of its two French stars. Dujardin and Bejo, bursting off the screen like irrepressible Roman candles, give performances that are both subtle and incandescent, reminding us of the truth of silent star Norma Desmond’s famous “Sunset Blvd.” line, “We didn’t need dialogue. We had faces.”

Luckily, I’ve already seen this wonderful film, so tomorrow night I’m off to see Chris sing and hoof his way through the Christmas pantomime Jack and the Beanstalk. For those of you unfamiliar with pantomime, first of all, it’s not MIME (e.g. Marcel Marceau or the silent movie) — there’s plenty of singing and dancing that centers around a very loose interpretation of a fairy tale, a fractured fairy tale, in reality. I went to a couple of lavish pantos in Canada years ago that that cost a small fortune to stage. That can be a problem, depending on the venue. You’d like to bring the children, but the cost almost guarantees that the audience is composed mainly of adults. The pantomime is known for certain conventions – men playing the part of women and vice versa, very risqué double entendre, hissing and booing when the villain walks on stage, lots of audience participation. Great fun.  In bigger budget pantomimes, such as the Canadian one, it’s customary to invite a well known person to take one of the lead roles. The opera singer Maureen Forrester and Manuel, the butler from the British television series Fawlty Towers, made appearances.  Another convention is to tailor some of the humor to the local political scene, as is done in Gilbert & Sullivan productions.


Jack and the Beanstalk

The Kingdom of Absurdia is broke — its citizens are fearful of the evil Giant and his even more evil sidekick, Slimeball. These two are causing havoc, demanding money and taking hostages. It is also rumoured that the Giant likes to eat people — especially children! When Jack’s true love, the beautiful Princess Rose, is captured he sets out to save her, assisted by his dodgy bunch of helpers. With Jack and the Beanstalk GAOS brings you a really traditional family show, complete with magic beans and a pantomime cow. 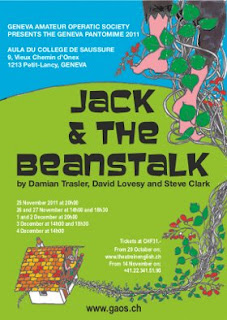