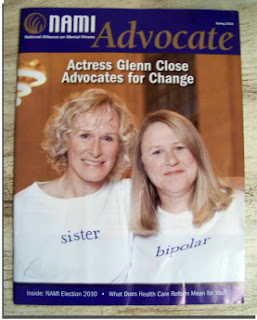 I’m not at all a fan of Glenn Close’s campaign to reduce stigma for the “mentally ill.” I especially hated the tee shirts (see above) that she and her sister wore for the Bring Change 2 Mind campaign.  Putting that aside, the Ottawa Citizen has an interview today with Glenn and her sister Jessie Close, which is cringeworthy.

Perhaps you can spot what I’m talking about.  Hint: I’m really only referring to one sentence out of the whole interview. The basis of my objection concerns the study that Sheila Mehta conducted in 1997 at Auburn University. To quote from the New York Times article on The Americanization of Mental Illness:

The results of the current study suggest that we may actually treat people more harshly when their problem is described in disease terms,” Mehta wrote. “We say we are being kind, but our actions suggest otherwise.”

Can anyone spot the harsh treatment in the Ottawa Citizen?

No prizes will be awarded for the right answer.

7 thoughts on “Can you spot the stigma in this interview with Glenn Close?”