My husband (Ian) sent me a link re Father’s Age Is Linked to Risk of Autism and Schizophrenia.” Well, of course, I gently reminded him that this is hardly breaking news, as these findings keep resurfacing at regular intervals. I recalled that he was the one who first brought the old man/schizophrenia information to my attention a few years ago. This latest “breaking news” has also become a thread in the ISEPP discussion forum. Member Randy Cima responded that “This is another nonsense psychiatric geneticist “study. You first have to buy the idea that “autism” is a “disorder,” – it isn’t – then you have to buy the idea that genes cause “disorders” – they don’t.

According to the the author’s bio, “For 35 years, Dr. Cima was the CEO of several MH agencies for children in California. He is a vocal opponent of psychotropics for kids. In his last agency, 26 of 30 children were medicated. In 3 years the number was 6 when he retired. He now writes and lectures on the subject.”

If you are among those who periodically declare, when talking about human behavior, that “it’s genetic,” or “it’s hereditary,” or “it’s in the gene’s,” please, my friend, be aware you are perpetuating this growing – and so far completely false – urban legend. Heed Professor Garfield’s cautionary words. Please stop. You have no scientific reason to continue this growing falsehood about our behavior.

Also, please consider, “psychiatric geneticists” do the vast majority of these “studies.” Please make room for your well-placed disdain for “modern psychiatry” to include this growing industry. Why do they do this? You know why. To develop “medications” to provide “treatment” so that you will buy them to “fix” those “bad genes.”

There’s a gene for everything,” one of us said. “Google it,” someone else said, so I did, on my very smart Smartphone. And that’s how it started. Someone would think of a human trait, condition, emotion – anything – and I would insert that word and add “gene.” For example, someone said “depression” so I googled “depression gene” and looked at the hits. You know how this works. I’d pick the most recent article or website, open it, and read the first few paragraphs, and add it to the list. Running out of ideas, we’d try anything. Someone yelled out “fairness!” Just as quickly, someone else said: “Fairness!? Oh come on! Fairness can’t be in a gene!”

There it was. The “fairness gene.” 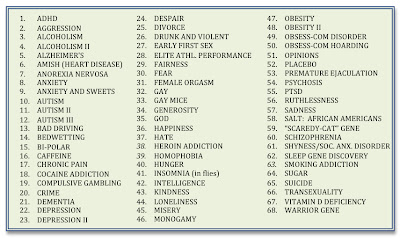 33. GAY MICE – 7/14/10 (POPSCI). A group of Korean geneticists has altered the sexual preferences of female mice by removing a single gene linked to reproductive behavior. Without the gene, the mice gravitated toward mice of the same sex. Those mice who retained the gene, called FucM, were attracted to male mice. (FucM is short for fucose mutarotase.) FULL ARTICLE – http://www.popsci.com/science/article/2010-07/has-gay-gene-been-found-female-mice

53. PREAMATURE EJACULATION – 12/1/08 (NewScientist). The volunteers in Dr. Marcel Waldinger’s study were 89 men who had so-called primary premature ejaculation, meaning they had always suffered from it from their first sexual contact onwards.For a month, their female partners were asked to use a stopwatch at home to measure the time until ejaculation each time they had intercourse. [Marcel D. Waldinger is a neuropsychiatrist and head of the Department of Consultative Psychiatry and the outpatient Department of Neurosexology at Leyenburg Hospital in The Hague in The Netherlands.] FULL ARTICLE – http://news.bbc.co.uk/2/hi/health/7657092.stm

Rossa’s point:
Yes, you might protest, but schizophrenia and autism are serious mental health disorders, unlike these rather frivolous examples above. There must be a gene causing these! Let’s think of your objection  another way. Revenue from drugs for schizophrenia prescriptions filled by people who are convinced, in spite of the evidence to date, that schizophrenia is a genetic and biochemical brain disorder, no doubt fund the vast amount of these other studies. The so-called genetic disorders that inspire the most fear (e.g,. premature ejaculation) will be the ones that eventually find their way into the drug pipeline.

4 thoughts on “Another urban legend: the old grey man’s genes ain’t what they used to be”